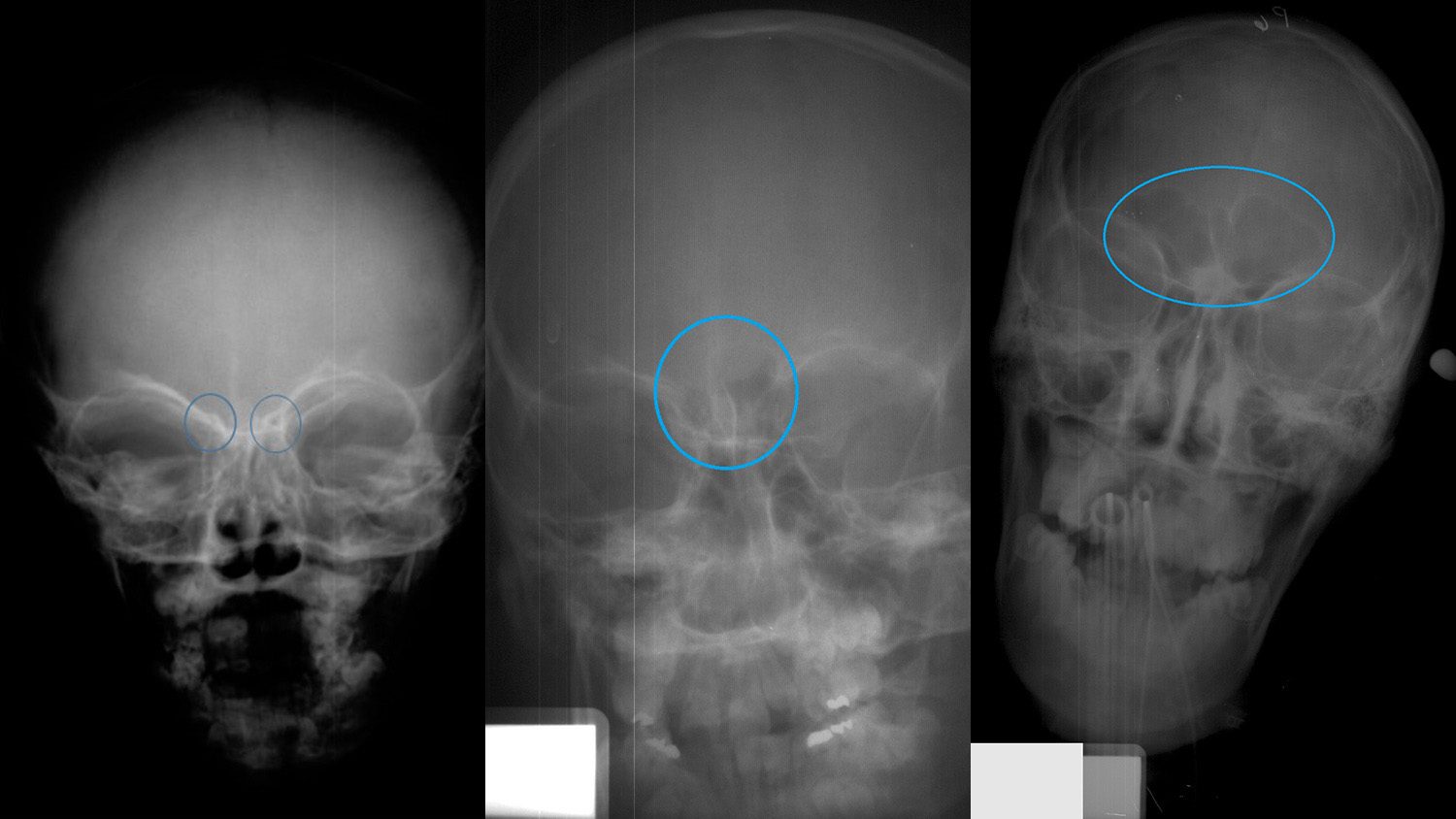 Forensic anthropology researchers at North Carolina State University have developed a technique that can provide an approximate age for juveniles and young people based on an X-ray of the frontal sinus region of the skull. The technique can be used to help identify human remains in forensic cases, as well as to determine age ranges in archaeological research or for living people for whom no records are available.

In adults, the frontal sinus is a large cavity in the skull just behind the forehead. But it doesn’t start that way – the cavity develops gradually over time.

To determine whether the development of the sinus could be used to determine age, the researchers evaluated frontal sinus X-ray images of 392 people between infancy and age 18. They found four distinct stages of development.

Until around the age of 6, the skull is in Stage 0, in which the frontal sinus cannot be detected at all. In Stage 1, two small cavities – with a gap between them – appear behind the central part of the forehead. Stage 1 generally lasts from ages 6 to 8, with a mean age of 6.5.

In Stage 2, the cavities expand, with a clear line showing where the cavities touch – but don’t merge. This stage tends to appear between the ages of 7 and 10, with a mean age of 8.

Stage 3 is a fully developed frontal sinus, characterized by the two cavities merging and expanding. This tends to occur between the ages of 12 and 18, with a mean age of 16.

“This is a proof-of-concept study demonstrating that frontal sinus X-rays offer a viable, noninvasive technique for estimating the age range of juvenile remains,” says Ann Ross, a professor of biological sciences at NC State and senior author of a paper describing the work. “This approach should be particularly valuable when working with incomplete remains.”

In addition, Ross says, the technique could be used to help estimate the age of living children and young adults for whom no records are available.

“The next step is to look at a larger sample of X-rays to further fine-tune the technique,” Ross says. “It’s useful now, but it would be even more valuable if we could improve its specificity.”

The paper, “Frontal Sinus Development and Juvenile Age Estimation,” is published in The Anatomical Record. Lead author of the paper is Kaitlin Moore, a former graduate student at NC State. Data collection that made the work possible was supported by the National Institute of Justice under grant number 2010-DN-BX-K214.

Published: May 19, The Anatomical Record

In order to examine growth and the utility of the frontal sinuses for age estimation, 392 radiographs were examined (♀=159 and ♂=233) from the Juvenile Radiograph Database at North Carolina State University and the Patricia Database from Mercyhurst University. The sample included individuals who range in age from 0 to 18 years old. Anterior view radiographs were examined and were then grouped based upon the presence or absence of the frontal sinus. Based on this, individuals were divided into four age categories.