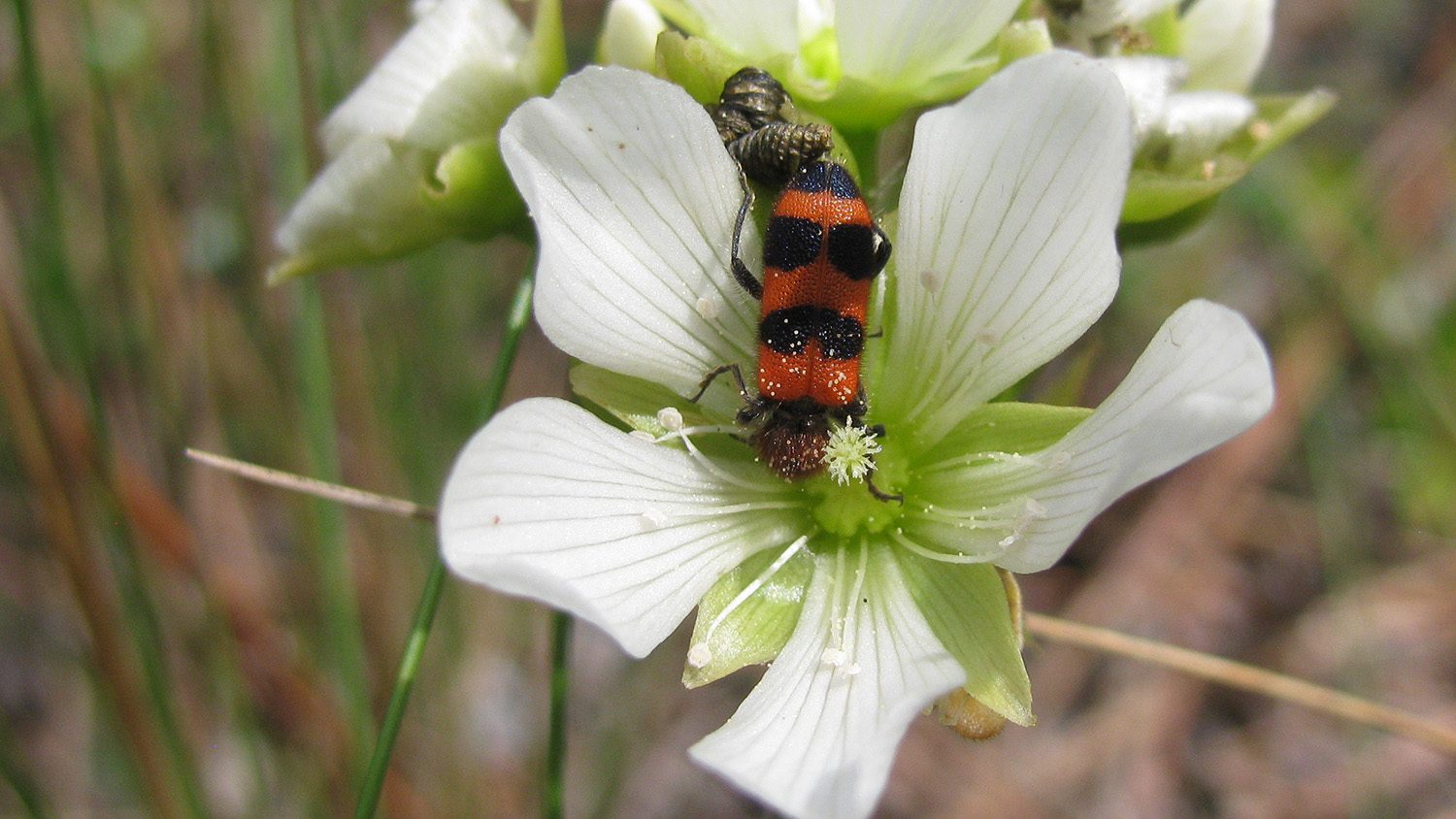 While most people are familiar with Venus flytraps and their snapping jaws, there is still a lot that scientists don’t know about the biology of these carnivorous plants. Researchers have for the first time discovered which insects pollinate the rare plants in their native habitat – and discovered that the flytraps don’t dine on these pollinator species.

Venus flytraps (Dionaea muscipula) are in a genus all their own, and are native to a relatively small area, restricted to within a 100-mile radius of Wilmington, N.C.

“These findings answer basic questions about the ecology of Venus flytraps, which is important for understanding how to preserve a plant that is native to such a small, threatened ecosystem,” says Elsa Youngsteadt, a research associate at North Carolina State University and lead author of a paper on the work. “It also illustrates the fascinating suite of traits that help this plant interact with insects as both pollinators and prey.”

“Everybody’s heard of Venus flytraps, but nobody knew what pollinated them – so we decided to find out,” says Clyde Sorenson, co-author of a paper describing the work and Alumni Distinguished Undergraduate Professor of Entomology at NC State.

Out of about 100 types of insects found on the flowers, only a few were both common and carrying a lot of pollen: a green sweat bee (Augochlorella gratiosa), a checkered beetle (Trichodes apivorus) and the notch-tipped flower longhorn beetle (Typocerus sinuatus).

The researchers also retrieved prey from more than 200 flytraps at the study sites. The three most important pollinator species – despite being found so often on the flowers – were never found in the traps.

“One potential reason for this is the architecture of the plants themselves,” Youngsteadt says. “Venus flytrap flowers are elevated on stems that stand fairly high above the snap traps of the plant, and we found that 87 percent of the flower-visiting individuals we captured – including all three of the most important species – could fly. But only 20 percent of the prey could fly. The pollinator species may simply be staying above the danger zone as they go from flower to flower, making them less likely to be eaten.”

But other factors may also come into play.

“We know that the snap traps are different colors than the flowers, and may possibly lure different species,” Sorenson says. “We don’t yet know if they release different scents or other chemical signals that may also differentiate which portions of the plant are attractive to pollinators versus prey. That’s one of the questions we plan to address moving forward.”

Researchers also plan to investigate additional Venus flytrap sites to see if the plant relies on these same core pollinator species in other parts of its native range.

“We also want to learn more about the flytrap’s pollination biology,” says Rebecca Irwin, study co-author and a professor of applied ecology at NC State. “How much and what kind of nectar do they produce? How much pollen do they need to reproduce successfully?

“And we know that Venus flytraps need periodic fires in their native habitat in order to thrive, but how do these fire events – and their aftermath – affect the plant’s reproductive success? There is still a lot to learn about these plants and their pollinators,” Irwin says.

The paper, “Venus Flytrap Rarely Traps Its Pollinators,” is published in the journal American Naturalist. The paper was co-authored by Michael Kunz of the North Carolina Botanical Garden at the University of North Carolina at Chapel Hill; Dale Suiter of the U.S. Fish and Wildlife Service; and Alison Fowler, Sara June Giacomini and Matt Bertone of NC State. The work was done with support from NC State University.

Abstract: Because carnivorous plants rely on arthropods as pollinators and prey, they risk consuming would-be mutualists. We examined this potential conflict in the Venus flytrap (Dionaea muscipula), whose pollinators were previously unknown. Diverse arthropods from two classes and nine orders visited flowers; 56% of visitors carried D. muscipula pollen, often mixed with pollen of co-flowering species. Within this diverse, generalized community, certain bee and beetle species appear to be the most important pollinators, based on their abundance, pollen load size, and pollen fidelity. D. muscipula prey spanned four invertebrate classes and eleven orders; spiders, beetles, and ants were most common. At the family and species levels, few taxa were shared between traps and flowers, yielding a near-zero value of niche overlap for these potentially competing structures. Spatial separation of traps and flowers may contribute to partitioning the invertebrate community between nutritional and reproductive functions in D. muscipula.