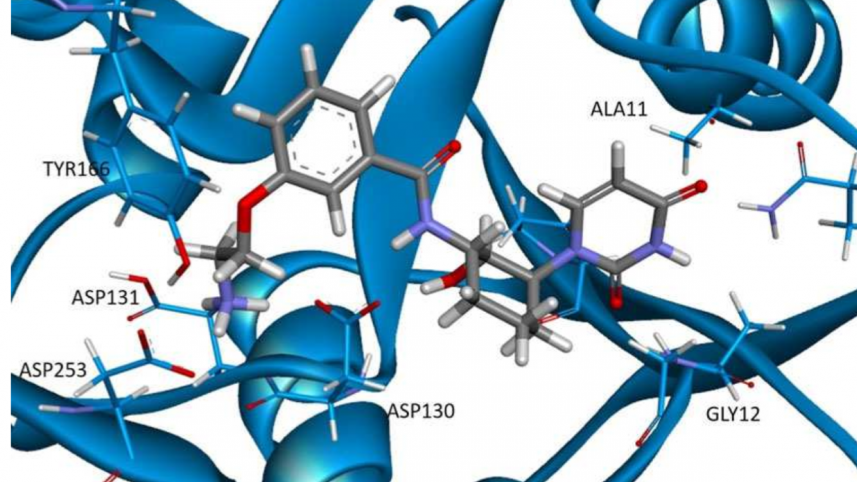 In a proof-of-concept study, researchers from North Carolina State University have pinpointed new compounds that may be effective in containing the virulence – or ability to produce disease – of Listeria, a well-known bacterium that can cause severe food poisoning and even death.

Listeria are bacteria most commonly found in soil. Humans come into contact with Listeria via contaminated meat or milk products and can contract listeriosis, which can lead to severe illness or death – particularly in very young, elderly and/or immunocompromised populations.

Denis Fourches, assistant professor of computational chemistry, postdoctoral researcher Melaine Kuenemann and Paul Orndorff, professor emeritus of microbiology, knew that inhibiting a particular enzyme of Listeria – known as glucose-1-phosphate uridylyltransferase (GalU) – led to dramatic modifications of the bacterial cell surface. These chemical modifications in turn rendered the Listeria much less virulent – in other words, less able to cause illness.

The researchers turned their attention to identifying potential compounds that could inhibit the function of GalU. Using computers and cheminformatics methods, they characterized, analyzed and virtually screened more than 88,000 compounds with the potential to inhibit GalU. Computer models found 37 compounds promising enough to be tested in vitro. Of the 37, three were deemed effective enough to warrant further study, although many of the other, less active compounds yielded key information about how their chemical structures relate to their activity in inhibiting the enzyme’s function.

“We can derive several predictive structure-activity relationships based on those 37 compounds and these relationships will help us design even more effective GalU inhibiting compounds,” Fourches says. “We plan to use our computers to virtually generate thousands of new analogues, virtually screen them, and select another batch of up to 50 molecules to be tested experimentally in the future. This is true research at the interface of disciplines.”

Interestingly, inhibiting GalU also served to make the Listeria more vulnerable to cefotaxime, an antibiotic to which the bacteria are naturally resistant.

“While our ultimate objective is to get away from antibiotics altogether, in the near term the antibiotic susceptibility opens up the possibility of combinatorial therapies that could include a GalU inhibitor and a known antibiotic such as cefotaxime,” Orndorff says. “Ultimately, we believe if the GalU inhibitor is effective enough, the host (human or animal) should be able to eliminate the listerial population without antibiotics. For farmers working toward antibiotic-free farms, this could be a wonderful solution.”

“This proof-of-concept study shows that small molecules can actually be developed to shut down the activity of one specific bacterial enzyme, leading to the suppression of virulence,” Fourches says. “This is clearly a new avenue for fighting drug-resistant bacteria.”

The research appears in Molecular Informatics. Kuenemann is first author and Fourches is corresponding author. Research scientist Patricia Spears conducted the experimental work, which was funded in part by the Public Health Service (grant AI103549) and the NC State Chancellor’s Excellence Fund.

Abstract:
Peptidoglycan walls of gram positive bacteria are functionalized by glycopolymers called wall teichoic acid (WTA). In Listeria monocytogenes, multiple enzymes including the glucose-1-phosphate uridylyltransferase (GalU) were identified as mandatory for WTA galactosylation, so that the inhibition of GalU is associated with a significant attenuation of Listeria virulence. Herein, we report on a series of in silico predicted GalU inhibitors identified using structurebased virtual screening and experimentally validated to be effective in blocking the WTA galactosylation pathway in vitro. Several hits such as C04, a pyrimidinyl benzamide, afforded promising experimental potencies. This proof-ofconcept study opens new perspectives for the development of potent and selective GalU inhibitors of high interest to attenuate Listeria virulence. It also underscores the high relevance of using molecular modeling for facilitating the identification of bacterial virulence attenuators and more generally antibacterials.