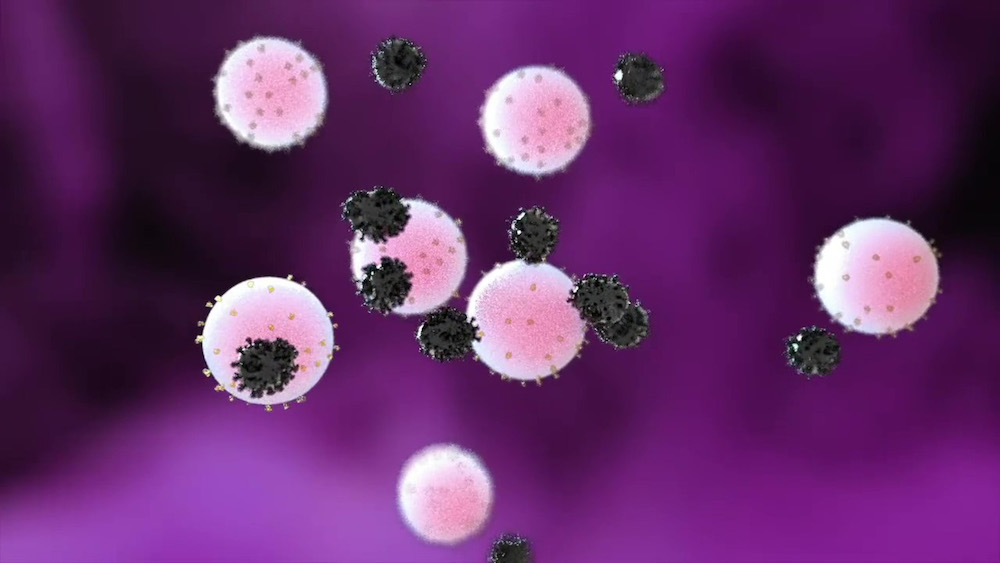 Nanodecoys made from human lung spheroid cells (LSCs) can bind to and neutralize SARS-CoV-2, promoting viral clearance and reducing lung injury in a macaque model of COVID-19. By mimicking the receptor that the virus binds to rather than targeting the virus itself, nanodecoy therapy could remain effective against emerging variants of the virus.

SARS-CoV-2 enters a cell when its spike protein binds to the angiotensin-converting enzyme 2 (ACE2) receptor on the cell’s surface. LSCs – a natural mixture of lung epithelial stem cells and mesenchymal cells – also express ACE2, making them a perfect vehicle for tricking the virus.

“If you think of the spike protein as a key and the cell’s ACE2 receptor as a lock, then what we are doing with the nanodecoys is overwhelming the virus with fake locks so that it cannot find the ones that let it enter lung cells,” says Ke Cheng, corresponding author of the research. “The fake locks bind and trap the virus, preventing it from infecting cells and replicating, and the body’s immune system takes care of the rest.”

Cheng is the Randall B. Terry, Jr. Distinguished Professor in Regenerative Medicine at the NC State College of Veterinary Medicine and a professor in the NC State/UNC-Chapel Hill Joint Department of Biomedical Engineering.

Cheng and colleagues from NC State and UNC-CH converted individual LSCs into nanovesicles, or tiny cell membrane bubbles with ACE2 receptors and other lung cell-specific proteins on the surface.

They confirmed that the spike protein did bind to the ACE2 receptors on the decoys in vitro, then used a fabricated SARS-Co-V-2 mimic virus for in vivo testing in a mouse model. The decoys were delivered via inhalation therapy. In mice, the nanodecoys remained in the lungs for 72 hours after one dose and accelerated clearance of the mimic virus.

Finally, a contract research organization conducted a pilot study in a macaque model and found that inhalation therapy with the nanodecoys accelerated viral clearance, and reduced inflammation and fibrosis in the lungs. Although no toxicity was noted in either the mouse or macaque study, further study will be necessary to translate this therapy for human testing and determine exactly how the nanodecoys are cleared by the body.

“These nanodecoys are essentially cell ‘ghosts,’ and one LSC can generate around 11,000 of them,” Cheng says. “Deploying millions of these decoys exponentially increases the surface area of fake binding sites for trapping the virus, and their small size basically turns them into little bite-sized snacks for macrophages, so they are cleared very efficiently.”

The researchers point out three other benefits of the LSC nanodecoys. First, they can be delivered non-invasively to the lungs via inhalation therapy. Second, since the nanodecoys are acellular – there’s nothing living inside – they can be easily preserved and remain stable longer, enabling off-the-shelf use. Finally, LSCs are already in use in other clinical trials, so there is an increased likelihood of being able to use them in the near future.

“By focusing on the body’s defenses rather than a virus that will keep mutating we have the potential to create a therapy that will be useful long-term,” Cheng says. “As long as the virus needs to enter the lung cell, we can keep tricking it.”

The research appears in Nature Nanotechnology and was supported by the National Institutes of Health and the American Heart Association. Jason Lobo, pulmonologist at UNC-CH, is co-author of the paper.

This post was originally published in Veterinary Medicine News.