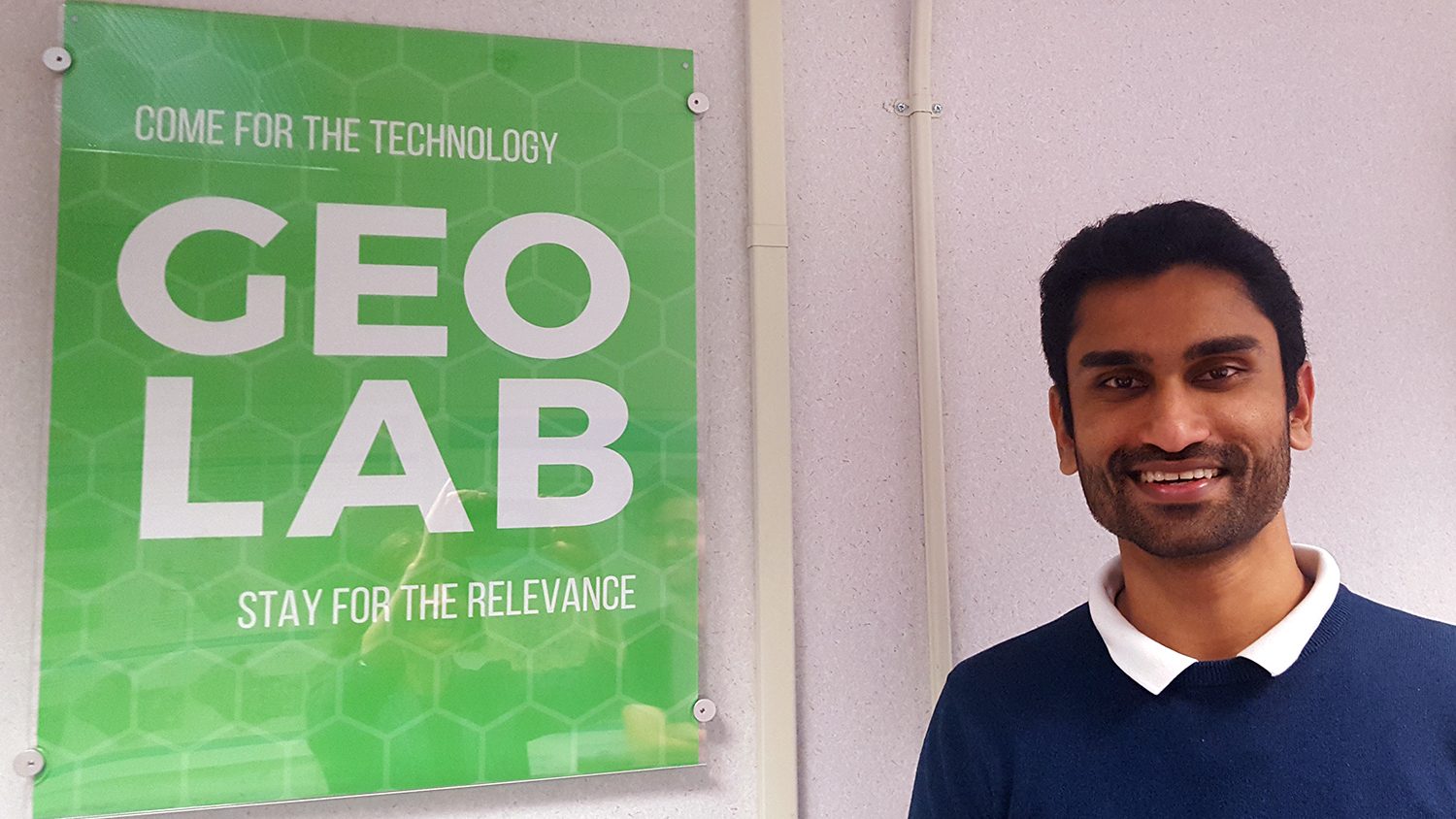 On the twelfth floor of the Wake County Office Building in downtown Raleigh, something very exciting is afoot: academic researchers and government experts are working side-by-side as never before to innovate the future. “That floor is an energized floor,” says Vishnu Mahesh Vivek Nanda, Geospatial Analytics Ph.D. student at North Carolina State University. “Things are happening there.”

Vishnu should know. He spends his Fridays on the twelfth floor, working on an experimental new project between NC State’s Center for Geospatial Analytics and Wake County government called “Geo-IDEAS: Geo–Innovation, Developing Analytics Solutions for Wake County.” The collaboration is led by his co-advisors, center faculty fellows Perver Baran and Laura Tateosian, and Wake County’s GIS System & Application Team Supervisor Carter Vickery. Their mission is to innovate how Wake County analyzes and uses spatial data, by sharing expertise between academia and government.

“At the Center for Geospatial Analytics, we advocate solving real-world problems, and now we have a connection with Wake County government to do that,” Baran says. In February 2017, she and Vickery met at the NC GIS Conference in Raleigh and arranged several meetings at the Center for Geospatial Analytics to discuss emerging research frontiers and potential for collaboration.

“I thought it would be great to have people from the Center for Geospatial Analytics over to the GeoLab,” Vickery recalls. She and her team at Wake County GIS established “the GeoLab” as part of the new Wake County Innovation Center, which opened on the county building’s twelfth floor in 2017 as a visionary collaborative space dedicated to open, forward-thinking discussion. The space allows staff who are otherwise immersed in day-to-day operations to “carve out time to think differently and prepare for emerging technology,” Vickery says.

In 2017, NC State launched its Geospatial Analytics doctoral program, and so partnering with the Center for Geospatial Analytics to co-fund a new Ph.D. student “was a natural fit,” Vickery says. So emerged Geo-IDEAS, a project to which Baran and Tateosian recruited Vishnu, to co-develop new spatial visualizations and app components at Wake County.

“Part of the goal of the Innovation Center is to create room for experimentation,” Vickery explains. “In operations, we’re very risk averse,” but in the GeoLab, staff can feel free to try new things and follow where they might lead. That includes experimenting with different technologies and generating novel ways of visualizing data.

Last August, Vishnu began spending his Fridays at the GeoLab, working closely with Wake County GIS staff including Charles Rudder, Wright Lowery and Lucas Piedrahita. Baran, Tateosian and Vickery also work closely with Vishnu to monitor progress and brainstorm. “Carter is just an amazing partner to work with. She is very inspiring and visionary,” Baran says.

“The general idea of our partnership,” Tateosian adds, “is cross-pollination from NC State, and to have someone from the Center for Geospatial Analytics embedded in the government offices to talk about the challenges that they’re facing…It’s an idea-incubator relationship.”

Being on site has made a big difference. “The team formed a true partnership with Vishnu,” Vickery says. He has been made to feel at home in the government offices, and being a part of weekly team discussions has given him “a clearer idea of the work that Wake County is doing, and projects we can do with them,” Vishnu reports. “Because this is government and not academia, their interests are different from what our interests are,” he explains. Yet common ground is still easy to find. “I look for things where there’s an outcome for a department,” Vickery points out. “This work connects Vishnu to departments and to understanding the pace of innovation in government, moving from idea to implementation.”

When Baran and Tateosian were recruiting a Ph.D. student to work on the project, they specifically sought a person who would do well “working closely with people and networking, being involved in ideation,” Tateosian says. Vishnu’s experience with running his own small business spoke to his exceptional ability to do cooperative work. After earning his bachelor’s degree, he and four friends decided to create a startup in web programming. Three years into the venture, Vishnu discovered his passion for research and left the company to pursue a master’s degree in geoinformatics. He also worked for over a year for the Indian Space Research Organization, using remotely sensed imagery to map vegetation, before coming to NC State.

Vishnu’s passion for remote sensing was a perfect fit for the first task that the Geo-IDEAS partnership would tackle––analyzing satellite data to detect changes in the amount of greenspace across Wake County over a twenty-year span. This was “a quick win,” Vickery says, as the project picked up the threads of a question previously explored for Wake County Parks, Recreation and Open Space, and demonstrated how different techniques could be used to find answers.

Vishnu’s closest partner on this project was Senior GIS Analyst Charles Rudder (now a senior GIS specialist at the company Growers), who used the programming language Python to perform analyses; Rudder honed his Python skills in Tateosian’s GIS 540 course, “GIS Programming Fundamentals,” while an NC State student over seven years ago. To compare with Rudder’s approach, Vishnu ran the same analyses using Google Earth Engine, which he learned to use in his GIS 713 course, “Geospatial Data Mining and Analysis,” and from Nick Clinton, a speaker at the Center for Geospatial Analytics’ Geospatial Forum series.

“It’s pretty remarkable that Charles and Vishnu were both using tools and techniques they learned at NC State, several years apart, to implement two distinct approaches to the problem,” Tateosian says. Doing so enabled them to compare the strengths and weaknesses of each approach.

A second successful project emerged from a chance discussion between Vishnu and GIS Analyst Wright Lowery one Friday afternoon. Vishnu mentioned in passing that he needed a large dataset to analyze for one of his courses, and Lowery immediately reached out to the director of Wake County Animal Control for a dataset to use; she was happy to oblige. While Vishnu ended up using another dataset for his course, he and his collaborators developed a valuable “proof-of-concept” with the Animal Control data that “will have a multiplier effect,” Vickery says, for other Wake County departments. Vishnu, Lowery and GIS Specialist Lucas Piedrahita transformed a spreadsheet of over 13,000 Animal Control dispatch records into an interactive web map, complete with hot spot analyses and an easy-to-use online dashboard, showing what can also be done with this and other departments’ datasets.

“That work will become operational pretty quickly,” Vickery says. Employees at Wake County Animal Control “were so happy to see their data in a way they hadn’t seen them before,” Vishnu says. The workflows that the team developed to make the data mappable will improve efficiencies at Wake County and reveal important spatial patterns for decision-making.

The future of innovation

“Our understanding of what innovation will look like at Wake County is evolving,” Vickery says. Partnerships like this one with Center for Geospatial Analytics will help to shape that innovation. Many people from Wake County government have been integrally involved in developing and supporting the partnership, and engaging with Center for Geospatial Analytics students during campus visits. Vickery credits them with a genuinely collaborative enthusiasm as she has “let the teamwork grow organically,” she says.

Vickery and Vishnu recently co-presented the Geo-IDEAS project at the 2019 NC GIS Conference in Winston-Salem, and she views the presentation as “a nice milestone” for Vishnu and the whole team. As she has watched team members work together over the past six months, Vickery has noted that “each has a different perspective, and may be in different stages of their careers, but each are bringing their gifts to the table.”

For partnerships like this, says Vickery, “The whole is much greater than the sum of its parts.”

Perver Baran, Laura Tateosian, Vishnu Mahesh and Carter Vickery would like to thank the following people for their support of the Geo-IDEAS partnership: