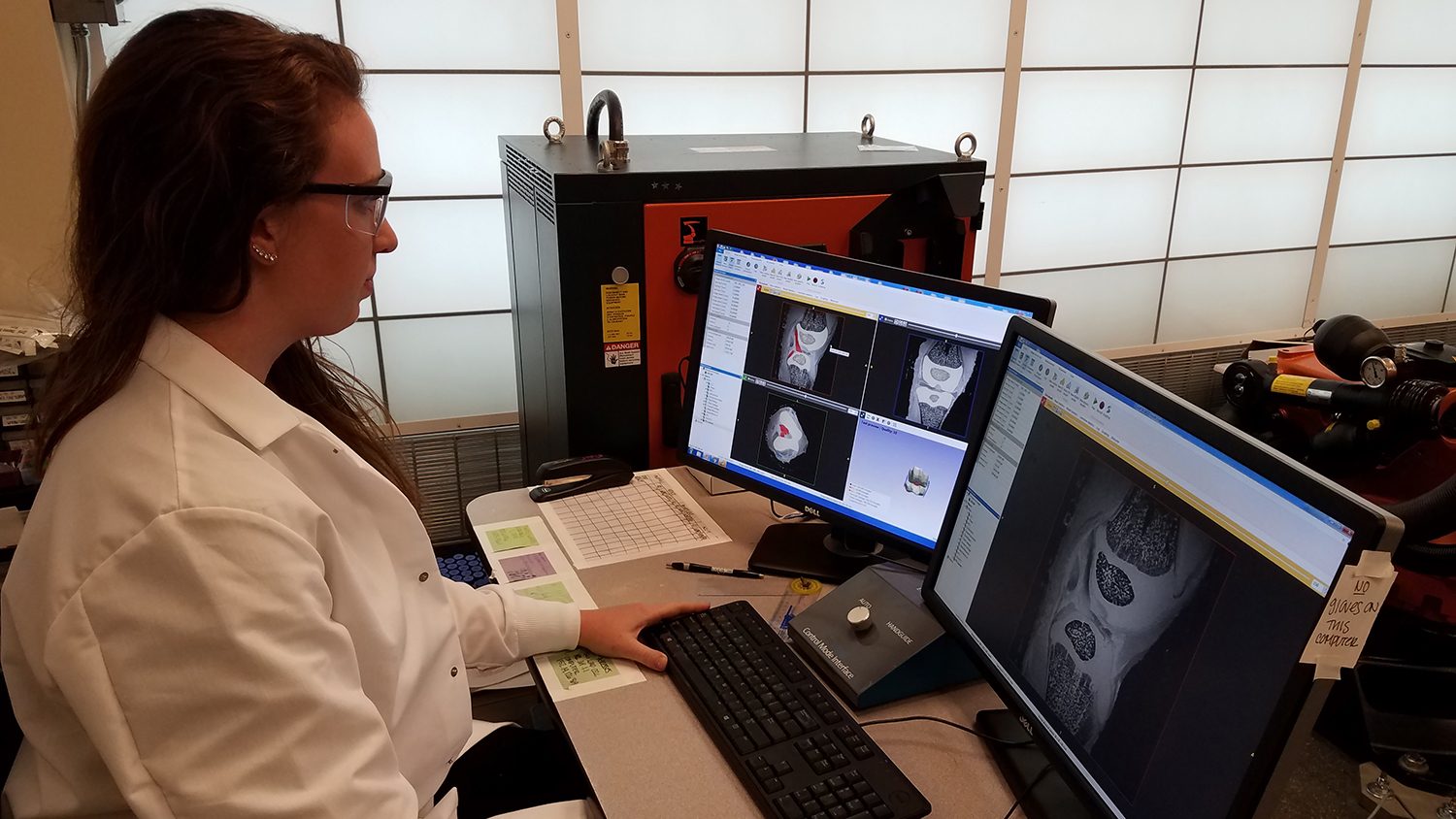 Researchers from North Carolina State University and the University of North Carolina at Chapel Hill have published research on how the knees of pigs compare to human knees at various stages of maturity – a finding that will advance research by this group and others on injury treatment in young people.

“There’s a lot we still don’t know about how human knees work at different stages of maturity,” says Matthew Fisher, corresponding author of a paper on the research.

“What we’ve developed is a model that will allow us – or any research team – to study changes in the knee joint using pig knees,” says Fisher, who is an assistant professor in the Joint Department of Biomedical Engineering at NC State and UNC.

“Our ultimate goal is to improve clinical treatment of joint injuries in children and teens, given the increased participation in sports and rise of injuries, such as to the anterior cruciate ligament or ACL,” Fisher says. “We’re specifically focused on changes that take place during the growth process – such as changes in the placement and orientation of ligaments during growth.”

Previous research had established that adult pig knees serve as a good model for research into adult human knees. However, less was known about how comparable pig and human knees were at various stages of growth.

For this study, researchers examined pig knees at six stages of growth, between birth and 18 months – which is comparable to early adulthood in humans. The researchers then compared the growth stages found in pigs to the available data on human knee growth.

“We focused on how the orientation of knee ligaments changes over time,” says Stephanie Cone, lead author of the paper and a Ph.D. student in the Joint Department of Biomedical Engineering. “And we found that the transitions in ligament orientation we saw in pig knees at various stages of maturity mapped very closely to the existing research on humans at comparable stages of maturity.”

“We’re excited about the potential for this model, but tracking ligament orientation using MRIs is really only a starting point,” Fisher says. “Our next steps include testing the pig knees mechanically in order to help us better understand how they move at various stages of growth: which joint components bear load, how these elements interact, and so on. A number of things change as we mature, but we are still trying to clarify the details – and those details can eventually inform future clinical practice. In fact, surgeons can use the pig model to test new surgical approaches for children and adolescents.”

The work was a collaborative effort involving the Joint Department of Biomedical Engineering, College of Veterinary Medicine, and the Comparative Medicine Institute at NC State and the departments of orthopaedics and radiology in the UNC School of Medicine.

“Being able to form a team with expertise in engineering, comparative biology, pediatric imaging and orthopaedics has been extremely valuable to this research and will continue to be important as we move forward,” Fisher says.

The paper, “Orientation changes in the cruciate ligaments of the knee during skeletal growth: a porcine model,” is published in the Journal of Orthopaedic Research. The paper was co-authored by Sean Simpson and Jorge Piedrahita of NC State and Drs. Lynn Fordham and Jeffrey Spang of UNC. The work was funded by the National Institutes of Health, under grant R03 AR068112, and the National Science Foundation, under a graduate research fellowship grant DGE-1252376.

“Orientation changes in the cruciate ligaments of the knee during skeletal growth: a porcine model”

Published: May 4, Journal of Orthopaedic Research

Abstract: Musculoskeletal injuries in pediatric patients are on the rise, including significant increases in anterior cruciate ligament (ACL) injuries. Previous studies have found major anatomical changes during skeletal growth in the soft tissues of the knee. Specifically, the ACL and the posterior cruciate ligament (PCL) change in their relative orientation to the tibial plateau throughout growth. In order to develop age-specific treatments for ACL injuries, the purpose of this study was to characterize orientation changes in the cruciate ligaments of the Yorkshire pig, a common pre-clinical model, during skeletal growth in order to verify the applicability of this model for pediatric musculoskeletal studies. Hind limbs were isolated from female Yorkshire pigs ranging in age from newborn to late adolescence and were then imaged using high field strength magnetic resonance imaging. Orientation changes were quantified from the magnetic resonance images using image segmentation software. Statistically significant increases were found in the coronal and sagittal angles of the ACL relative to the tibial plateau during pre-adolescent growth. Additional changes were observed in the PCL angle, Blumensaat angle, intercondylar roof angle, and the aspect ratio of the intercondylar notch. Only the sagittal angle of the ACL relative to the tibial plateau experienced statistically significant changes through late adolescence. The age-dependent properties of the ACL and PCL in the female pig mirrored results found in female human patients, suggesting that the porcine model may provide a pre-clinical platform to study the cruciate ligaments during skeletal growth. This article is protected by copyright.