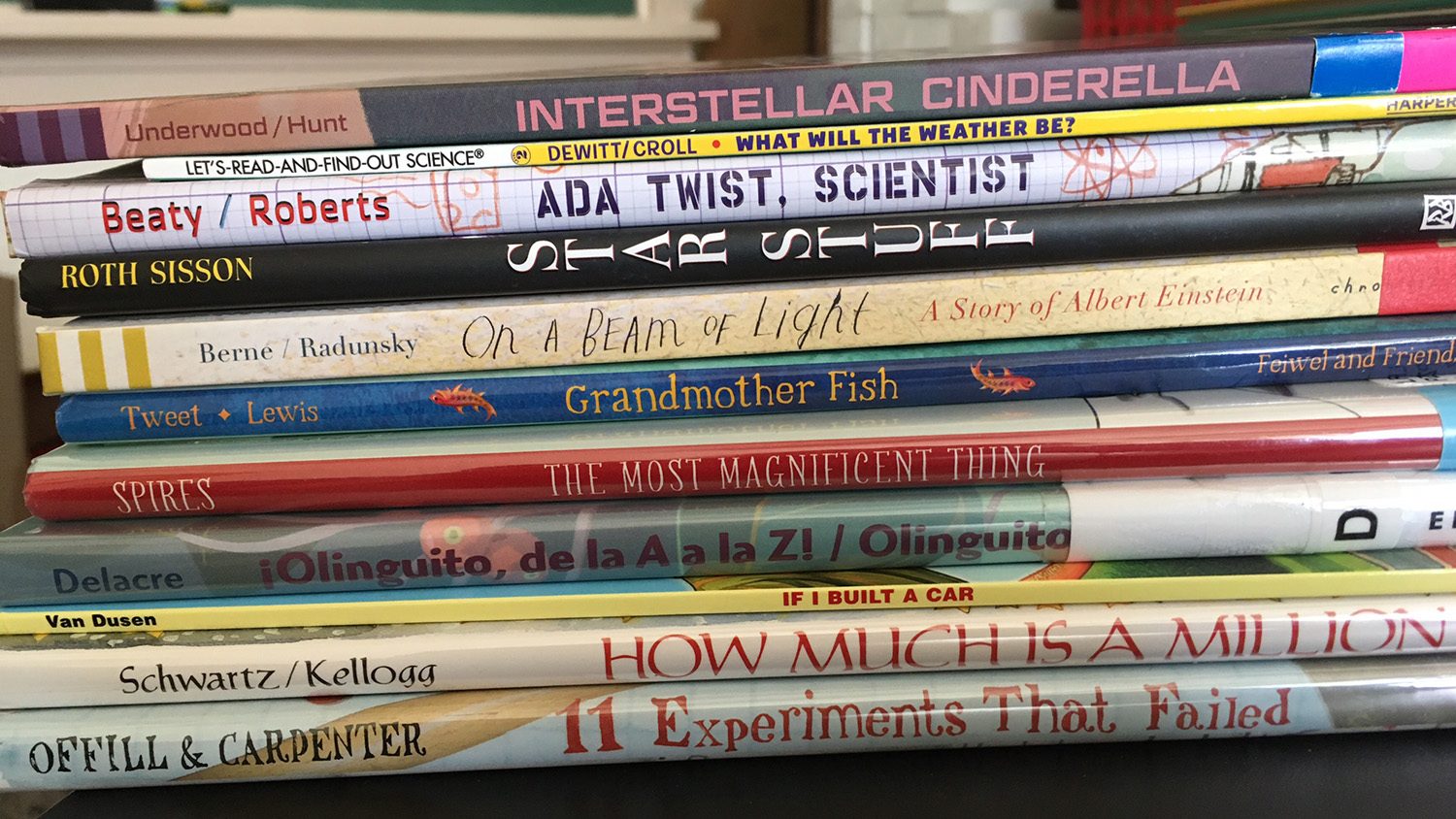 Editor’s Note: This is a guest post from Holly Menninger, director of public science in NC State’s College of Sciences.

As a scientist, a parent, and a person with a deep appreciation for the arts, I think there may be no better place for science and the arts to meet than on the pages of children’s picture books.

Through illustration, prose and poetry, picture books have the power to transport children and adult readers to other worlds, to introduce them to people who have changed the world, and to inspire curiosity and imagination.

By tapping into the curious questioner that resides in each of us – but especially children – science-themed picture books make the process of science, a way of looking at the world and understanding how it works, accessible to everyone.  Science is not, and should not be, the domain of only professionally trained scientists.

NC State recently hosted The Story Collider, a non-profit organization dedicated to telling true, personal stories of science, here on campus. In their story-telling-for-scientists workshop, The Story Collider’s Liz Neeley and Erin Barker reminded us that stories grab us and stick with us because they speak directly to some of our most powerful emotions: joy, disgust, fear, anger, sadness. Science-themed picture books follow suit, speaking both to the heart and mind. In doing so, they stick with us (and our children), providing a meaningful, human connection to science.

In celebration of the 2017 North Carolina Science Festival’s theme of art and design, we’ve curated a list of science-themed picture books. In preparing this list, we sought recommendations from scientists, librarians, educators and parents. We tried to be mindful of the various research fields represented within the College of Sciences as well as our core values of diversity and inclusion.

Picture books – also known as read alouds – are intended to be shared. Our scientists and students read a number of these titles to children attending the State of the Sciences: Live! at the Library on Friday, April 21. We hope you’ll be inspired to share these books with the young people in your life, and perhaps suggest some of your favorite titles that we missed in the comments below.

Spectacular mixed-media collage helps recount the story of the woman responsible for the foundations of modern-day computing.

Guided by curiosity and the scientific method, young girl searches for the source of a stink and inspires her family along the way.

A funny story about beans that may secretly be about math.

With dark and rich illustrations, this lyrical study of Earth’s most mysterious creature is equal parts suspenseful and informative.

A call-and-response tale walking readers through our evolutionary family tree.

How Much Is a Million?, by David M. Schwartz & Steven Kellogg

If I Built a Car, by Chris Van Dusen

An out-of-this-world retelling of the classic fairy tale, where Cinderella sets her sights on sonic ships and socket wrenches.

Me… Jane, by Patrick McDonnell

Young Jane Goodall and her special childhood toy chimpanzee Jubillee take in the world with a sense of wonder.

The Most Magnificent Thing, by Ashley Spires

Young girl struggles through process of creation and failure as she attempts to make the most magnificent thing.

A story of the Big Bang in lively verse that explains how we all contain a bit of star stuff.

Olinguito, de la A a la Z!/Olinguito, from A to Z!, by Lulu Delacre

Bilingual adventure exploring the flora and fauna of the Ecuadorean Andes while searching for an elusive mammal.

On a Beam of Light: A Story of Albert Einstein, by Jennifer Berne & Vladimir Radunsky

A charming, inspiring biography of the famous physicist emphasizing curiosity and discovery.

Our Earth, by Anne Rockwell

A simply illustrated picture book that helps kids explore the geology and geography of our planet.

Young engineer dares to be different, and gets advice from a special mentor.

Star Stuff: Carl Sagan and the Mysteries of the Cosmos, by Stephanie Roth Sisson

The story of the curious boy who never stopped wondering and went on to inspire millions to contemplate the universe.

Young girl in the Middle Ages takes time to observe and learn, and becomes the first person to document the process of metamorphosis.

All around the world, tiny invisible creatures are busy doing important things.

A special thank you to Marla Gregg from the College of Sciences Advancement Office and Gwen Glazer from the New York Public Library for their assistance in creating this list.

An interdisciplinary team led by Christine Hawkes is identifying beneficial fungi found in five key crops with the aim of using them to help plants fend off diseases and tolerate drought stress.