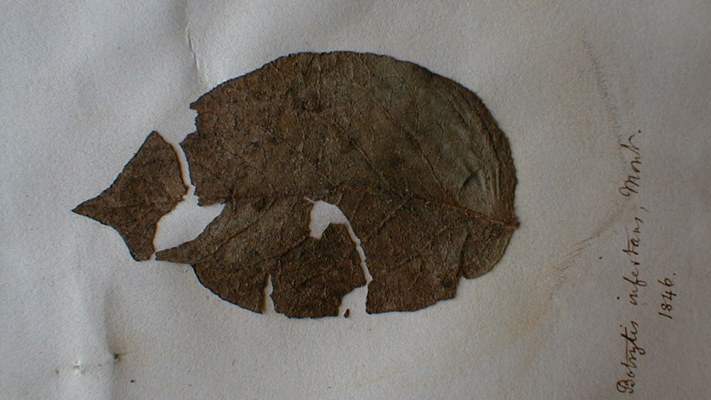 New North Carolina State University research delves into the movement and evolution of the pathogen that caused the Irish potato famine in the 1840s, which set down roots in the United States before attacking Europe.

To track the evolution of differing strains of Phytophthora infestans, the pathogen responsible for the Irish potato famine and a major cause of late-blight disease on potato and tomato plants around the world, NC State plant pathologists studied 12 key regions on the genomes of 183 pathogen samples – historic and modern – from across the globe.

The study, published in PLOS ONE, shows that a lineage called FAM-1 caused outbreaks of potato late blight in the United States in 1843 and then two years later in Great Britain and Ireland. It was also found in historic samples from Colombia suggesting a South American origin. FAM-1 caused massive and debilitating late-blight disease outbreaks in Europe, leaving starvation and migration in its wake. Jean Ristaino, William Neal Reynolds Distinguished Professor of Plant Pathology and the corresponding author of the study, theorizes that the pathogen arrived in Europe via infected potatoes on South American ships or directly from infected potatoes from the United States.

But FAM-1 wasn’t just a one-hit wonder that made its mark and then quickly disappeared.

FAM-1 survived for about 100 years in the United States but was then displaced by a different strain of the pathogen called US-1, Ristaino said.

“US-1 is not a direct descendant of FAM-1, but rather a sister lineage,” Ristaino said.

US-1, in turn, has been elbowed out of its eponymous homeland by even more aggressive strains of the pathogen that have originated in Mexico. Our winter vegetable crops, grown there and imported into the U.S., harbor the pathogen, she said.

The pathogen’s effects aren’t limited to the decimation of Ireland’s potato crop 170 years ago. Billions are spent worldwide each year in attempts to control the pathogen, Ristaino said. Potatoes in the developing world are particularly vulnerable as fungicides are less available and expensive.

Paper co-authors are Amanda Saville, a research technician in Ristaino’s lab, and Michael Martin, an associate professor with the Norwegian University of Science and Technology. The research was supported by a grant from USDA’s National Institute of Food and Agriculture.

Abstract: Phytophthora infestans (Mont.) de Bary, the causal agent of potato late blight, was responsible for the Irish potato famine of the 1840s. Initial disease outbreaks occurred in the U.S. in 1843, two years prior to European outbreaks. We examined the evolutionary relationships and source of the 19th-century outbreaks using herbarium specimens of P. infestans from historic (1846-1970) and more recent isolates (1992-2014) of the pathogen. The same unique SSR multilocus genotype, named here as FAM-1, caused widespread outbreaks in both U.S. and Europe. The FAM-1 lineage shared allelic diversity and grouped with the oldest specimens collected in Colombia and Central America. The FAM-1 lineage of P. infestans formed a genetic group that was distinct from more recent aggressive lineages found in the U.S. The US-1 lineage formed a second, mid-20th century group. Recent modern U.S. lineages and the oldest Mexican lineages formed a genetic group with recent Mexican lineages, suggesting a Mexican origin of recent U.S. lineages. A survey of mitochondrial haplotypes in a larger set of global herbarium specimens documented the more frequent occurrence of the HERB-1 (type Ia) mitochondrial haplotype in archival collections from 1866-75 and 1906-1915 and the rise of the Ib mitochondrial lineage (US-1) between 1946-1955. The FAM-1 SSR lineage survived for almost 100 years in the U.S., was geographically widespread, and was displaced first in the mid-20th century by the US-1 lineage and then by distinct new aggressive lineages that migrated from Mexico.