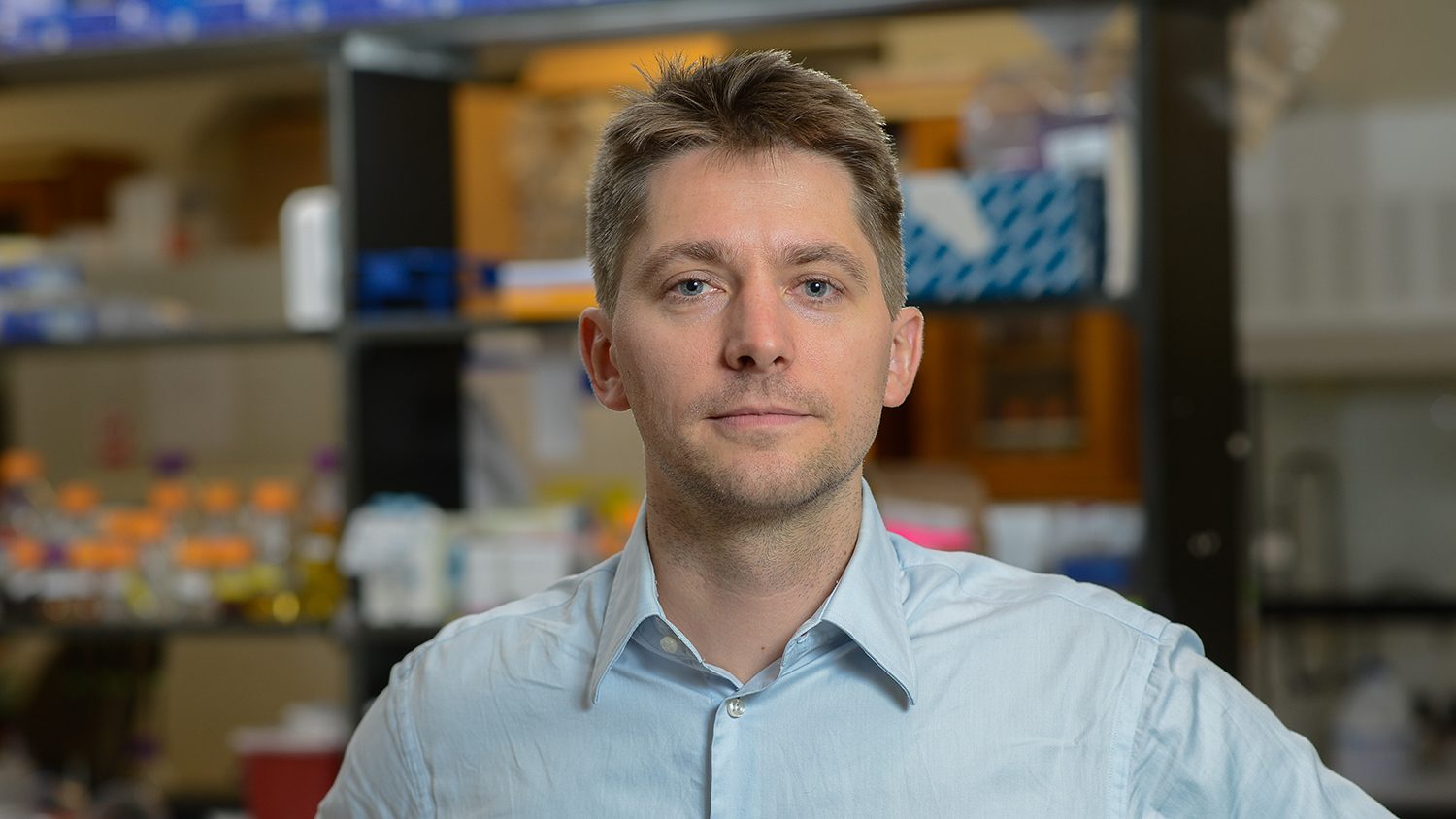 With every bite we eat, we feed not only ourselves but also the trillions of microbes that inhabit our gut. But what part of the diet do these microbes eat exactly? According to NC State researcher Manuel Kleiner, answering that question could help us design diets that lead to better health.

On Monday Dec. 17, the Foundation for Food and Agriculture Research announced that Kleiner was one of nine scientists nationwide selected to receive a prestigious New Innovator Award. The award advances the careers of highly creative new scientists who bring innovative, ground-breaking thinking to bear on problems facing food and agriculture.

Kleiner, who studies microbial communities, joined NC State’s Department of Plant and Microbial Biology in 2017. The award will further his research into the microorganisms that inhabit the intestinal tract.

“While we know that what we eat can benefit intestinal microbes or harm them, we don’t have a good understanding of which microbial species consume and convert specific dietary components – things like fats, fiber, proteins, starches, sugars and so forth,” Kleiner said.

Kleiner and his colleagues recently developed techniques that will aid in this research: They use a mass spectrometer to measure with high accuracy the mass of molecules derived from the microbes in a community, then they use this information in a newly developed software program that allows them to link microbes with those dietary components.

“Ultimately,” Kleiner said, “a better understanding of the interaction between the intestinal microbiota and the diet will drive the development of food products that more effectively deliver nutrients and bioactive compounds. The research will also provide industry and academic researchers with tools to follow how intestinal microbes metabolize specific compounds, such as novel nutritional products and pharmaceuticals.”

Interested in partnering with NC State on this research?

, director of research partnerships in the College of Agriculture and Life Sciences.

Diet has a large impact on the functioning of the gut microbiota, with potential for both beneficial and detrimental effects on human and animal health. Numerous studies have shown that diet has a strong effect on microbiota composition and that microbial metabolism of specific dietary components plays a crucial role in health and disease. However, direct evidence for which dietary components are converted and assimilated by specific microbiota members in an animal is currently lacking. The dietary components metabolized by particular gut microbes can be predicted based on metabolism of specific microorganisms in pure culture, as well as changes in microbiota and metabolome composition in response to the addition or subtraction of particular dietary components. However, in the latter case, such studies can only analyze dietary input and metabolite output. Therefore, it remains a challenge to identify precisely which microbes are metabolizing particular dietary components to produce specific metabolites. Only once this is possible can we truly manipulate gut microbiota to improve overall human and animal health.

Our goal is to directly link each intestinal microbe with the dietary components they consume and convert using high-resolution mass spectrometry-based approaches in the realm of metaproteomics. Our central hypothesis is that natural carbon isotope ratios of dietary components, and dietary substrates labeled with stable isotopes, can be used to track their assimilation by specific microorganisms. The approaches we use are based on the paradigm that an organism’s stable isotope composition corresponds to the one of its growth substrates. Our approach uses innovative methods (Protein-SIF) that we recently developed, which allow measuring the stable isotope composition of a large number of species in microbial communities. These methods are accurate enough to detect differences in a species’ carbon isotope signature caused by the differing stable carbon isotope signatures of dietary components. We have already demonstrated in mock microbial communities that we can measure natural carbon isotope ratios of community members with high accuracy. The methods can also be used to measure stable isotope ratios for other elements if isotope enriched substrates are used. Use of isotopically enriched substrates provides the necessary higher sensitivity needed for pulse-chase experiments to determine cross-feeding effects in the community. The rationale that underlies the proposed research is that by establishing the link between multiple dietary components and their microbial consumers, we can begin to directly address the role of individual microbiota species in dietary conversions.